The Trials and Tribulations

In some Ontario waters, early season muskies are a frustration to be dealt with. Are they hiding? Inactive? Are they feeding? Suspended?

It’s difficult to put a pattern together when there’s very little feedback on the water. There’s also the ethical question of whether or not we should be chasing muskies in July when the water temps are at their highest.

I’ve been tangling with this problem for years and I’m happy to tell you that, as of the last three years or so, I think I’ve keyed in on an interesting dynamic between musky behaviour and warm water. I’ll share my experiences on tracking muskies through spring and early summer and I’ll let you decide whether to take advantage or not…

The first sign of muskies in my season occurs when they’re spawning. I’ve mentioned this in previous articles but it really is important for me to ‘take a census’ of where the fish are spawning and how popular the area is to spawning muskies. It seems to change every year with the weather and wind patterns. In mid May, there are no rods or tackle on my boat.

I do carry a water temp gauge, a note pad, and a good pair of polarized sunglasses though. In my neck of the woods, you get maybe two good days of calm sunny warm weather to take your census. I look in shallow grassy back bays near creek mouths when the surface water temps are 58 to 60 degrees Fahrenheit.

Ok, so let’s assume you found an active spawning area. Now what? Well, now we have to wait until the musky opener in June for the next step.

A month has gone by and we’re now into the third Saturday in June. I know where the muskies were, and I know where they are going… eventually, in August. Where are they right now? Again, I pull out my trusty temp gauge to narrow the playing field. The water temps could be anywhere from 60 to 75 degrees depending on the previous weather trend. My best feedback actually doesn’t come from the muskies yet. It comes from pike!

“My best feedback actually doesn’t come from the muskies yet. It comes from pike!”

Increase your odds and expand your knowledge… hire a guide! 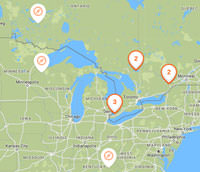 Find a musky guide in your area with our Trip Planner.

Know a guide that's not on our map? Make a suggestion.

The Relationship Between Pike and Muskies

The relationship between pike and muskies living in the same body of water can reveal secrets that a pure musky lake might not easily give up. Here’s how this works…

I know a few things about this relationship. I know that, in lakes where both species reproduce naturally, the muskies spread their spawning out by as much as two weeks in my water. The wisdom is that musky fry are decimated by the earlier spawning pike fry, so to insure the musky’s survival, they spread the spawn out over a time period that includes other warm water species like bass, brown bullheads, and gar. As the water warms, the pike fry have more options than baby muskies. Now here’s where the warm water thing starts to come into play.

The larger pike, meaning the big spawning females, become less tolerant of the warming shallows (70 degrees and up), and head for cooler waters. Most people thought this meant an exodus straight out to sea, me included. However, a few years ago I discovered a phenomenon I’d never encountered before, simply because I’d never looked in that direction.

“…a few years ago I discovered a phenomenon I’d never encountered before, simply because I’d never looked in that direction.”

Of course you knew this!

Thermocline: a steep temperature gradient in a body of water such as a lake, marked by a layer above and below which the water is at different temperatures. 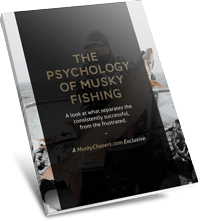 Why do you fish for Muskies? Read “The Psychology of Musky Fishing” mini eBook.

Here’s the scenario: I still target big pike at this time because they are often a more cooperative quarry, but also because their location and post-spawn musky location are often the same! On this particular opener, the shallows were up to 78 degrees. The water had been much cooler the week before while pike fishing but some recent intensely hot weather had set in since then. I couldn’t believe how quickly the water had heated up!

Of course, we found no pike on the 4 ft deep weed flats. I looked to the nearest deep open water (15 ft and deeper), for the answer but found nothing there either. No bait, no hooks on the graph, nothing. So, I went back inland and employed my FishHawk temp gauge to see what the heck was going on.

There’s an intermediate laneway leading out of one of those shallow weed flats. Our boat was now sitting in ten feet of water in that laneway. I dropped my temp gauge down slowly and, at 5 feet down, the gauge readout suddenly dropped to 65.5 degrees! I’d found a Shallow Water Thermocline! We stayed and targeted the area, letting our baits drop a little deeper than usual. We picked up a 32 inch pike and a 48 inch musky! I’m happy to report that this scenario has been consistent now for the past three years. I think you get the picture.

Fast forward to the second week in July 2020 and the surface water temps are in the low 80s. I should have chosen to stay on shore but I wanted to check out the possibility of cooler water temps near much deeper water. I was also armed with a small piece of fishing gossip. Apparently, a guest at one of the lodges had caught a nice musky the day before… on a walleye jig…. down 24 feet. This info could be relevant to our search.

I stopped the boat in the vicinity of a known musky haunt near a mid lake flat next to 40 feet of water, featuring a timely perch migration.

Again, I pulled out my temp gauge. The surface temp was 79.5 degrees; still warm, but a bit lower than inland temps . I lowered my temp sensor down slowly to reveal a thermocline, if there was one. At 18 feet the readout was still 78 degrees. But, when it hit 20 feet, the readout plummeted to 68 degrees! There it was! I’d found another early season thermocline on my lake.

FYI, by August, our winds can push the thermocline down as deep as 90 feet over 170 feet of water, as can be seen readily on any sonar.

“The trick would be to troll the newly found thermocline by putting our deepest bait about 4 feet above the cool water seam.”

We decided to target mid lake flats in 25 feet of water. The trick would be to troll the newly found thermocline by putting our deepest bait about 4 feet above the cool water seam.

Within an hour, we had one lost rip on our shallow bait (only down 6 feet), and a second nice 53 incher on the deep bait running at 16 ft. However, my enthusiasm dipped when I saw the condition of this poor fish. Even before hitting the net, I could see that her tail was still beaten up from the spawn. 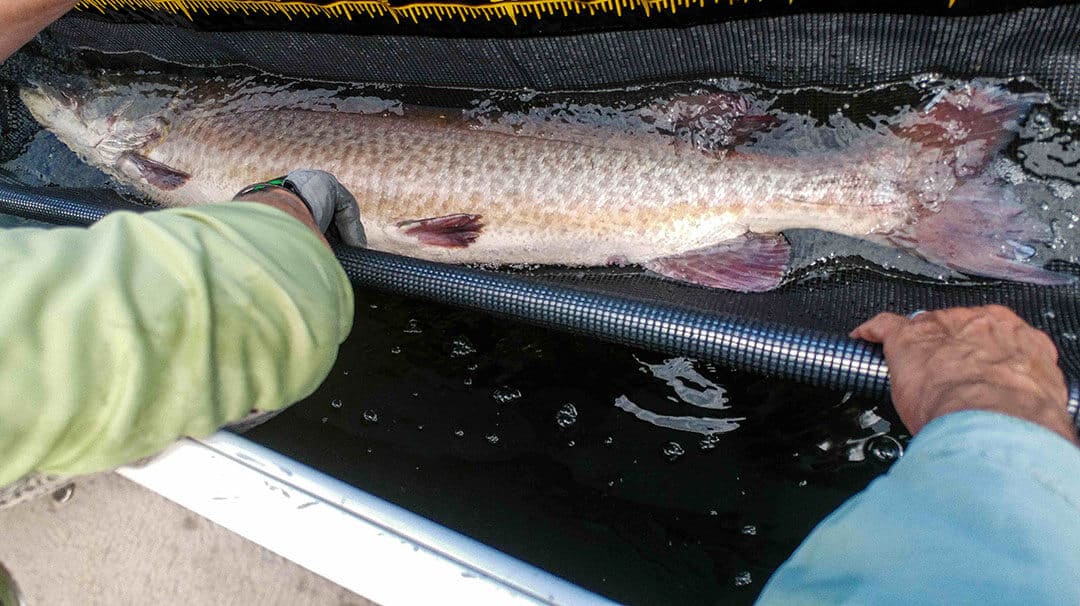 Barely netted, she already looked way too stressed to take out of the water. (Note the ‘red eye’ and flushed flanks of our fish in the accompanying photo below.) We transferred her from the net to a cradle, never leaving the water, a quick measurement, and she swam off fairly strong but lazy. We’d taken this one water photo and that was it. I hope she survived.

We left the water early. Another fishing buddy reported his day’s exploits as having up to 12 musky encounters with only one 41 incher landed. The hits were lethargic warm water ‘misses’, a testament to the stressful conditions.

Note the ‘red eye’ and flushed flanks of our fish.
Photograph by Dan Colomby

The good news is that we’d found the muskies sitting accessibly on the bottom or near the thermocline, trying to stay out of the exhausting heat. This thermocline pattern finally explained why I’d caught fish trolling open water in Julys gone by, usually over 27 feet of water.

Another interesting observation this time of year is that the baitfish were riding high throughout the warm water band, taking full advantage of a massive shad fly hatch. The muskies had to venture high to feed on the equally stressed lethargic baitfish. It’s truly amazing how the wisdom of nature creates such a perfect feeding scenario for the whole food chain under such conditions! 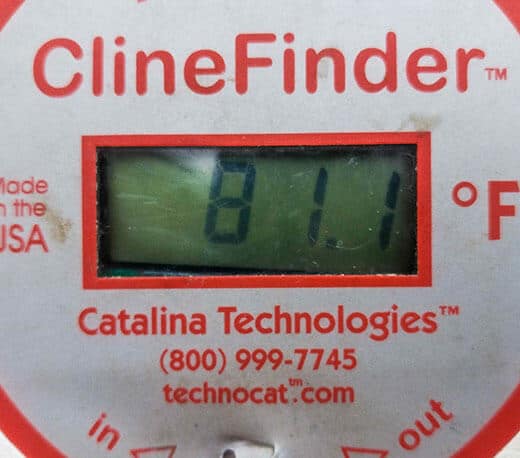 Temperatures into the 80s. The ‘infamous' shad fly (also known as may fly).
Photograph by DaMongMan

The bad news is that we had to dredge active muskies up through a 20-foot-deep layer of hot water at a time of year when they were already facing a stressful seasonal challenge. Their thin thermocline haven was sandwiched between the boiling surface and a low oxygen layer below that further held the muskies hostage to the elements. This is the perfect recipe for delayed mortality and it’ll stay that way, or worsen, until the next big wind storm mixes it all up.

Some food for thought here is that early season shallow thermoclines occur right under our noses and they seem to be the missing link between opener and the glory days of August when the muskies really come alive.

I’d venture to say that from ice out through July is a stressful time for muskies. Left to their own natural devices, they know how to survive the challenges with little room for error. The danger is in human interaction through negligence or passive ignorance. With knowledge comes responsibility.

Please use this info compassionately. Muskies are seeking this cooler water for a reason. Observe the conditions and execute your fishing plans accordingly.

Good luck out there and best fishes!

Have you made similar observations on your home water? Does the level of stress on muskies play into your planning? Let us know in the comments below. 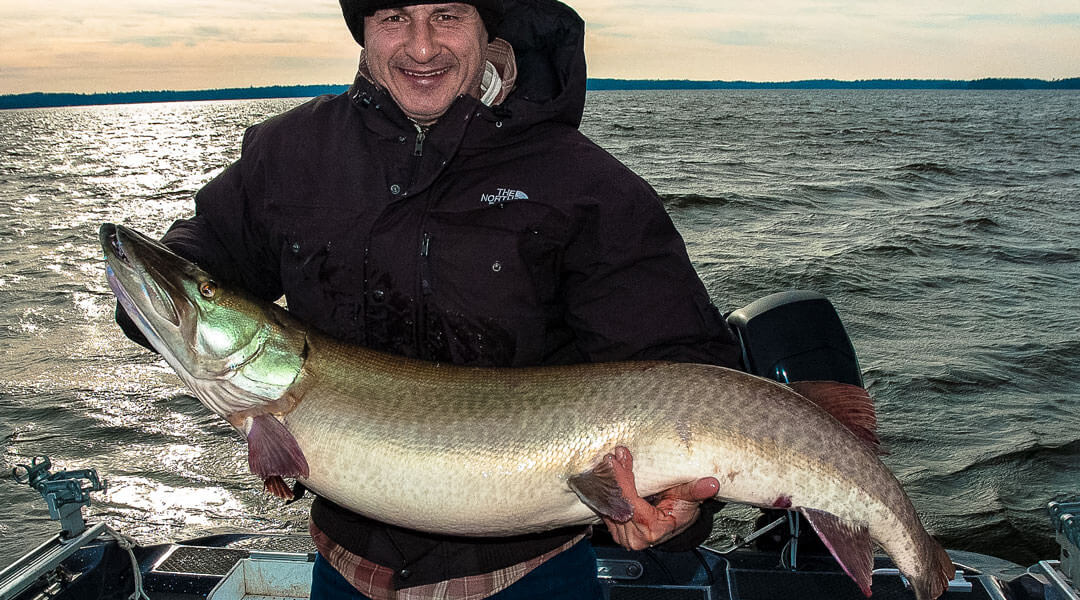 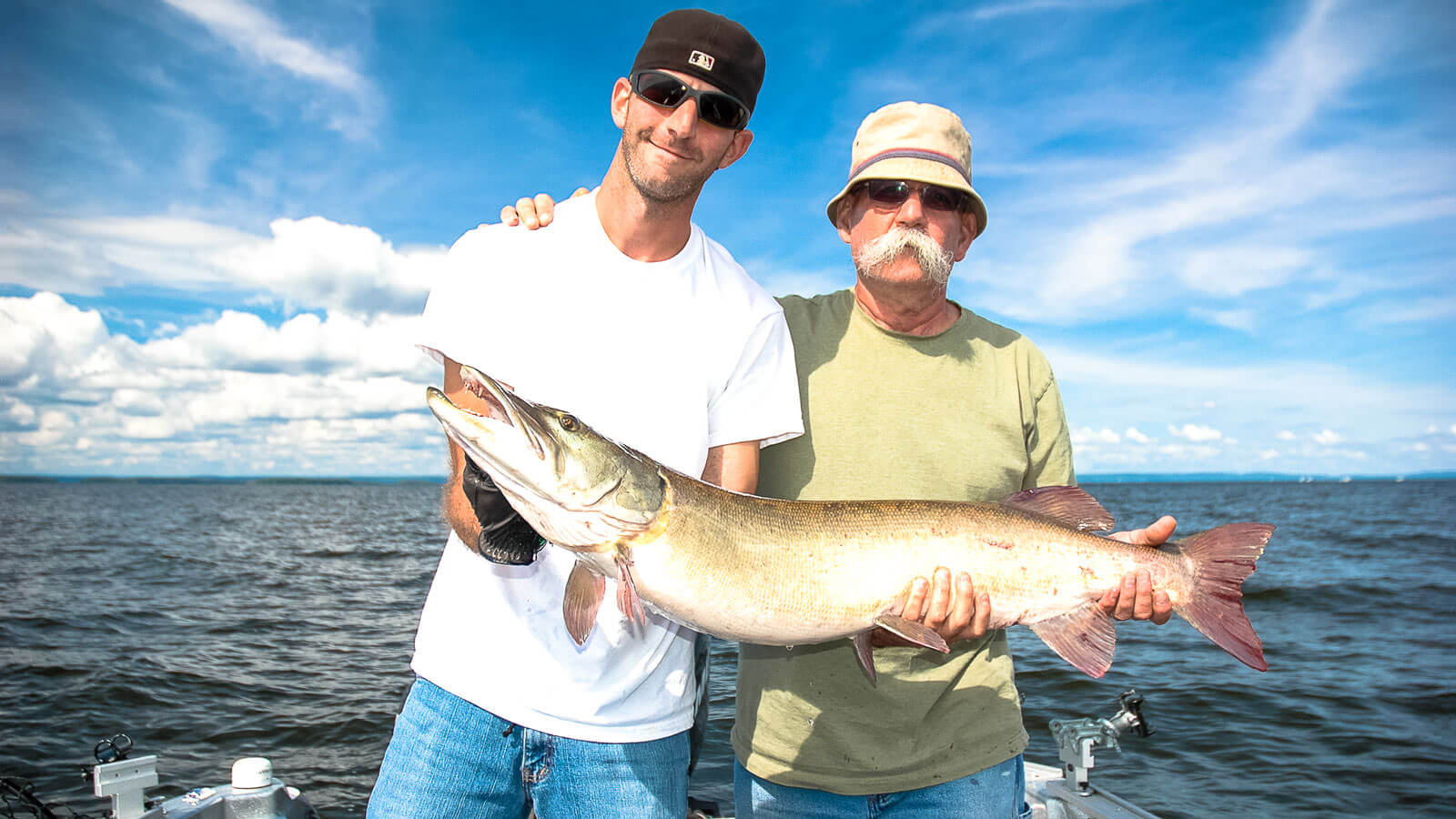